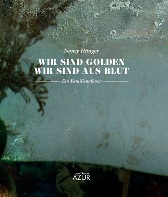 On Saturday, April 23 at 6 p.m. Nancy Huenger will read from her book “Wir sind golden. We are made of blood” (published 2014 by edition AZUR).

In spring 2014, Nancy Huenger’s “We are golden, we are made of blood” was published – an abysmal, breathless narrative about children who will remain children forever. The I in these lyrics remembers cousins killed in the “parlor war,” lost fathers, powerless mothers, and the double-burned blood that holds it all together.

The book was inspired by a find of pictures in a condemned house, photos that had been glued together by the persistent dampness and whose motifs had thus overlapped in a bizarre way. Now the book itself became the inspiration, becoming the starting point for Dana Berg and Max Aschenbach (GEH8) for the exhibition “Thicker than Water”.

Nancy Hünger, born in 1981, studied fine arts at the Bauhaus University in Weimar and then devoted herself entirely to literature. She lives as a freelance writer in Erfurt. In 2011, she was Jena’s city writer, and in 2013 she was a fellow of the Künstlerhaus Edenkoben. In 2014 Nancy Hünger was awarded the Caroline Schlegel Prize of the City of Jena for an essay on the story “Alte Abdeckerei” by Wolfgang Hilbig, and in 2015 she received the Harald Gerlach Thuringian Literature Fellowship.

“It is a lyric poetry that is clearly willing to pull out all the stops of language, figurative and tonal.” Jan Wagner

“A long, groping exercise in grittiness, in the imaginative power of storytelling.” Volkmar Mühleis, Deutschlandfunk

“A language that flows like a river away from its source – always trying to grasp something that cannot actually be grasped linguistically.” Michael Hametner, Book Journal MDR FIGARO

“… deeply sad, sometimes angry, at the same time of a captivating beauty …”

“This intricate prose undertakes nothing less than a search for the zero point of storytelling.” Jens-Fietje Dwars, Palm Tree.