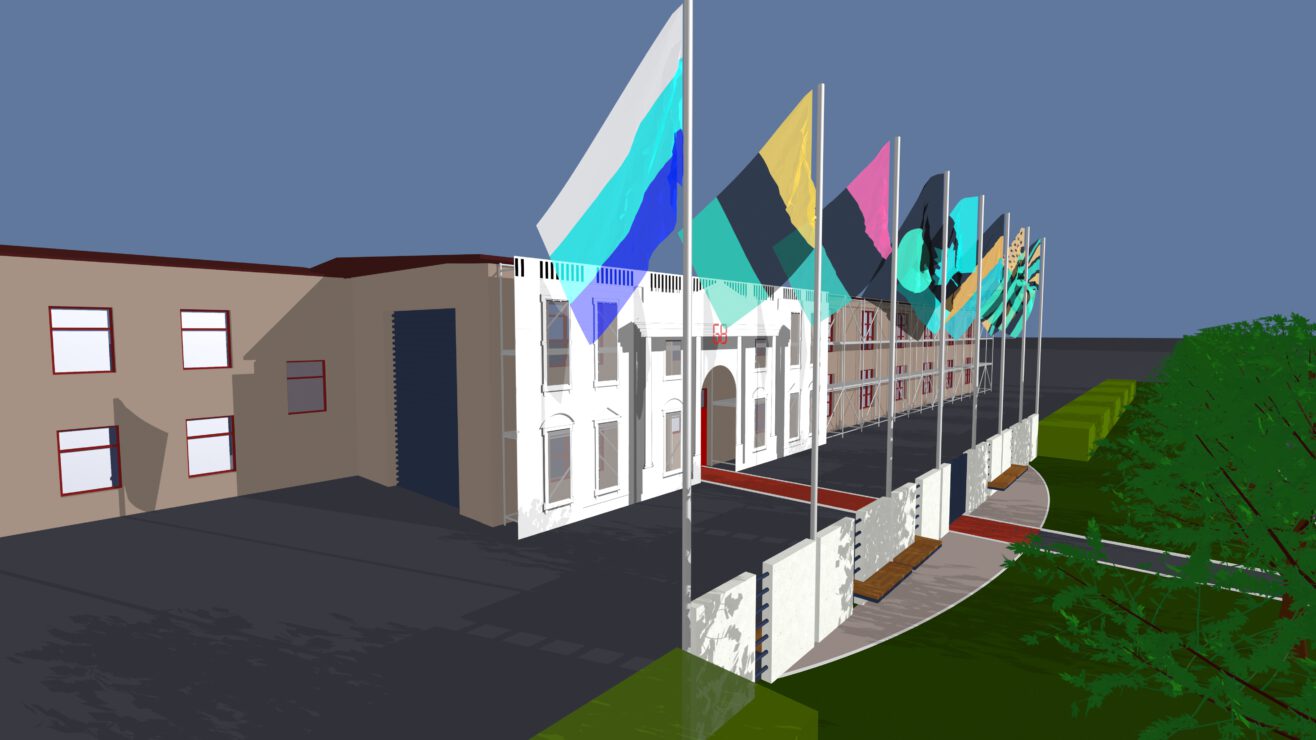 An art project by the artist Saeed Foroghi for the GEH8.

BACKGROUND
Under the title “G?-Flaggschiffe”, the artist Saeed Foroghi (Berlin) has created a multi-layered artistic installation for the façade and open-air grounds of our club building. The artwork deals with our name in a profound and humorous way and at the same time refers to the ambivalence of identity and national symbolism. It clearly improves the quality of the adjacent open spaces and directs the attention to the GEH8 as a production and presentation location for art and culture.

CONCEPT
Construction phase 1:
The art commission of the city of Dresden has appreciated the project and has taken over the costs proportionately. Thanks to this support, we were able to realize a first construction phase on the school-facing side of our building and have begun to erect a highly visible flag installation near the boundary of the site to the public foot and bicycle path. The installation consists of eight flagpoles with flags of the G8 states attached to them, albeit in complementary colors. The poles were mounted in a base that also functions as a wall bordering the property. Parallel to the flag installation, a scene-like façade construction will be erected shortly.

Construction phase 2:
In a second construction phase we wanted to upgrade the public and semi-public areas around the flag installation. We wanted to build a path that would serve as a new access to the rear entrance door of the GEH8 and connect it with a small square as an entrance area at the public foot and bike path. Along the boundary of our property some benches should also invite you to linger.
For this second construction phase, we have applied to the Pieschen municipal district office for funding, together with a recommendation from the art commission. However, this application for funding was surprisingly rejected at the last meeting of the Pieschen municipal district council. Shortly afterwards, the AFD city council faction publicly defamed the work of art as rubbish, our building and our grounds as ruins and rubbish dump and discredited our association’s work.

CALL FOR DONATION
We would like to realize the project, especially (but not only) for this reason, and ask for support in the form of this fundraising campaign.

The next stage in the realization of the artwork includes the construction of the electric flag control and a LED display visible from afar. For this we need 6.000,- €. All other planned elements (path, place and benches) we will try to realize at a later date, if we could work out a financing for it.

Help us to realize the next stage of the artwork now! Support us with your donation!

Donations are tax deductible. Up to 200,- Euro the transfer voucher is valid as proof. For donations over 200,- Euro we issue a donation receipt. 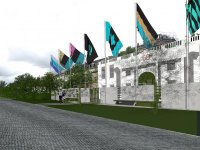 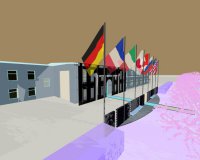 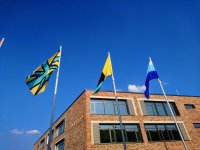