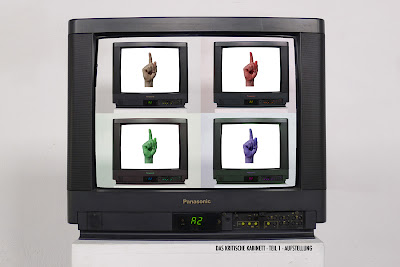 For about 100 years, the ever-growing guild of art has been busy breaking criteria and habits and making them incomprehensible. For a long time this has also been institutionally supported and we all expect art to subvert our knowledge, our language and our standards and to create realities beyond what can be criticized and described. With all this in mind, a circle of committed representatives of the artists’ guild got together and asked themselves: But what are we supposed to do if no one criticizes us anymore? What are we there for if no one scolds us or praises us to the skies? And what are we supposed to orient ourselves by if no one shows us the way? How are we to understand our own actions if no one can tell us who we are?

And they called four bright minds, from whom they expected instruction and judgment. The spirits they called were partly from the established public, partly from the underground. They were to disseminate their wisdom and faces on the basis of selected works by Dresden artists and, like the artists, remain concealed, nameless. Because the attention should not be diverted by names from what it was really about and the thought should be granted dreamlike freedom. Thus the critical sages spread out their judgment. And since the dedicated guild people had learned from art never to take judgments and rules literally, but to reinterpret them in artificial formations and to process or contain them according to their respective adventures, they poured the teachings of the called into a first experiment – a walk-in arrangement.

The selected artistic works that the arrangement integrates are spatially arranged in four directions. On the right side of the room is a colorful painting triptych in panoramic format, and in front of the final wall of the room is a black, expansive object installation. On the left side, opposite the triptych hangs a less monumental assemblage, while opposite the object is a video work. The works also differ in style, atmosphere and content. Different worlds look out from them to the viewer.

They are now accompanied by the comments of the summoned spirits, which are presented here anonymously in the medium of video. The artistic works viewed speak a language apart from verbal statements. The critical representations, on the other hand, describe, praise, and reproach, projecting in each case their interpretive grids onto the world and onto the artistic objects. Critical appraisals can open up and channel access to art, but they can also close it off. They enter into supporting or disturbing contact with the work of art. If the description, interpretation, or criticism is narrow, violent, or appropriating, the work of art must assert itself against it with its own power. The visitor to the installation is left with the opportunity to compare art and criticism, but also to observe the competition of standards that speak from the descriptions, interpretations, and evaluations.

The initiators themselves are delighted with the initial instruction they have been able to gain from the fusion of art and interpretation, and invite everyone to visit the arrangement, which can be walked through from 24.8. in the geh8 art space. 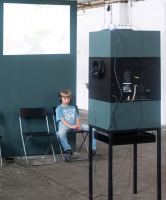