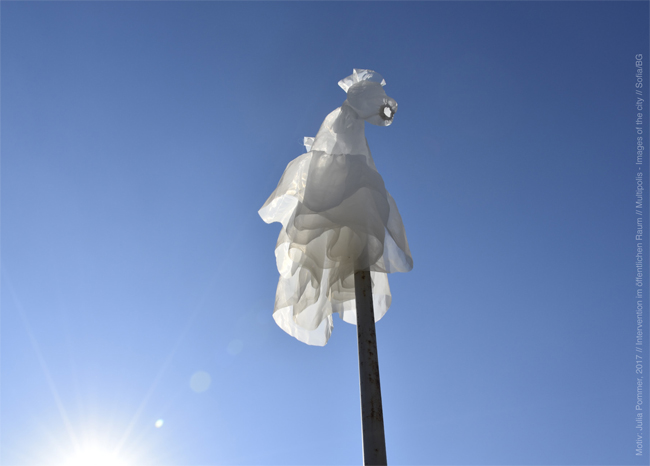 MULTIPOLIS – Images of the City / Dresden

A group exhibition with results of interventions in public space in Sofia (BG), curated by Marleen Andreev from GEH8 Kunstraum as a guest program of MULTIPOLIS – Images of the city, an interdisciplinary exhibition project initiated by Nataliya Todorova and Ivana Nencheva from THE FRIDGE from Sofia (BG).

MULTIPOLIS – Images of the city examines images of the city of Sofia – as an archetype, place of residence, landscape, metaphor and place of representation. Problems of stereotypes of certain urban spaces of Sofia are scrutinized through artistic, philosophical and sociological debates. The project aims to create an interactive and multidisciplinary forum. Of particular interest are the visual, acoustic, and social images that collide in specific regions of Sofia.

During a one-week residency in Bulgaria’s capital in June 2017, five German artists realized various interventions in public space. By looking from the outside at a city that was partly foreign to them, they made an independent contribution to the Multipolis project. The artist Marleen Andreev, who curates both the Multipolis guest program in Sofia and the exhibition in Dresden, acted as an intermediary.

As a cooperation partner of this project, the GEH8 Kunstraum is already becoming the presentation venue for a satellite exhibition alongside an exhibition planned for October at the Sofia Municipal Gallery. The five German guest artists Elisabeth Rosenthal, Frank Zitzmann, Julia Pommer, Marleen Andreev and Thomas Judisch will show in Dresden results of their performative, installative and participative actions from Sofia.